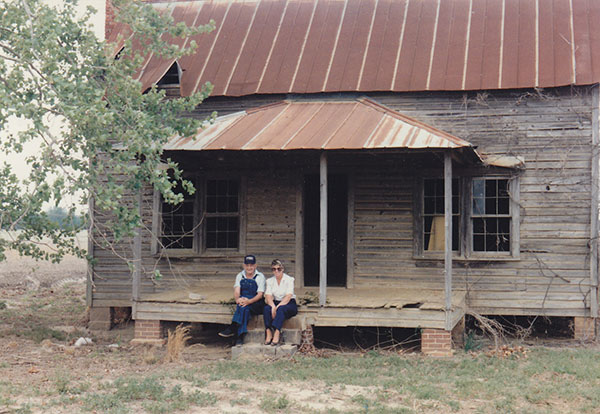 Today for some reason, I have been thinking a great deal about my childhood and one thing in particular. I just happened to drive by an area that was being developed and noticed the tree stumps and roots jutting from the earth and it brought back a powerful memory from my childhood… a place… A place that I had actually tried to erase from my memory because to me it was such an arduous time and certainly not a place that I was particularly fond of. But alas, the memory remained. This particular place was what we as children referred to as the “root patch”. Of couse, this is not what it actually was but that’s what we kids called it. In actuality it was referred to by our parents and other adults as “new ground”. This is an area filled with trees and brush and was to be cleared to make new fields to plant new crops. After it was bulldozed the debris had to be manually removed and, unfortunately, that was a job that fell to the children. Of course most of the time Mama and Daddy would be by our side helping but my sister, Gloria, and I have often theorized that the reason farmers had children was to raise their own farm hands so that they did not have to pay the help. Maybe true… maybe not… but I had always hoped deep down inside that love had something to do with it too. Any way… as hard as we worked, I always felt loved.

We spent our days during this period picking up the roots and piling them up into a pile and then they were burned. It seemed that as fast as we removed the roots, ten more replaced them. It was like the land was producing roots and the more roots you removed, the more that came back, and I guess that is why we called it the root patch. It was not a chore we looked forward to and more often than not, we would become distracted, especially if Mama and Daddy weren’t with us. We’d wander off into the woods and find a grape vine or plum tree and crawl up into the branches and eat grapes or plums until our teeth were as sharp as razors. When we were tired of eating we would swing through the branches on the vines and pretend we were Tarzan, Jane or Sheba of the Jungle. It was lots of fun until Mama and Daddy discovered that we weren’t getting much done. Eventually, the root patch got cleared… I don’t really know how… but it did and when it did, I can remember being so happy that I did not have to return to that place again. Little did I know that I would return to that place again and again to pick cotton, harvest peanuts and pick tobacco as these were the crops that replaced the roots. Certainly more profitable crops than roots, but hard work nevertheless.

And, of course, thinking about the root patch evokes other memories. Once such memory involved a bull. Getting back to the root patch you had to go through many other fields and gates and over fences. I remember this one day my older sister, Gloria, and my younger brother, Earl, and I were headed to the root patch. There was a bull in one of the pastures we had to go through and we were feeling mischeivious and decided that we needed some excitement and we would have us a bull fight. We had seen pictures and had read about how the toreadors did the bull fights and how if you waved something red in front of a bull, he would charge. So.. and my memory is a little fuzzy on this part… I think it was Earl, had on a red shirt so he took it off and was prancing around pretending he was a bull fighter and he started running around taunting this bull. He ran around a little and then he piffed the bull off. Now the word piffed is a word I made up. It means you’re a little bit pissed and a little bit miffed, but the word piffed doesn’t sound as bad as pissed. Well, anyway, he piffed the bull off and the bull kinda snorted and came at him and we all started running and the last thing I saw was Earl diving over the fence just in time to escape the horns of the bull. Thank God, the top of the fence did not have barbed wire or he would have been missing half his belly skin. It kinda taught us a lesson. If you don’t know how to bull fight, don’t mess with the bull. After that, we gave the bull some latitude and avoided his domain as we made our way back to the root patch to begin another fruitless (or that’s the way we saw it) day of hard labor.

When the work day was over and the sun would start to go down, we would begin the long trek home… avoiding the bull by the way… through the fields, over the fences and down the dirt roads, stopping along the way to pick up an unusual rock or pick some blackberries from the bush on the fence. We walked everywhere and as we were walking, the sun slowly going down, we would see and hear the most awesome sights and sounds… I can still hear and see them now… the whippoorwill singing, the lightning bugs glowing and the frogs croaking for rain and the sun turning red as it was setting on the horizon. These were the sights and sounds of a long hot southern summer day finally coming to an end for a child.